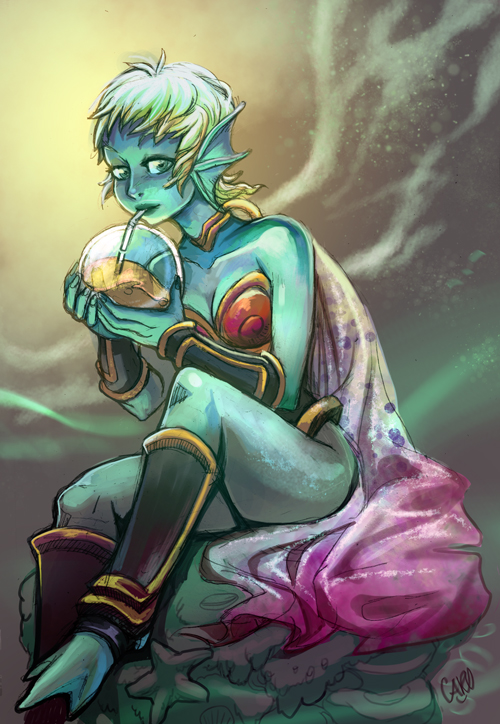 Hey guys-  I’m taking over the first Fan Art Friday! When it came to deciding what game to draw from, it was a difficult decision since there are a lot of little and big games out there that I’d love to draw a little scene from.  I went with Naija from Aquaria sippin’ on gin and juice. Ok, it’s just soup… at least that’s what she’ll tell you.  Many of you probably know this one already but Naija is boss… and she has white hair and I like painting characters with white hair.

The first time I played Aquaria,  I played it with mouse and keyboard since I didn’t have a good controller . It was uncomfortable since my wrists get so tired after a long day of working on the pc. I was still encouraged enough to keep at it and got decently far until I died and realized I never saved. Good thing to know- those red crystals are save spots.  I didn’t go back to it until recently. I had a controller and I knew where to save my progress and now there’s nothing between me and the deep blue sea. I haven’t finished it yet but I didn’t want to stop playing it so I probably will.  I might feel inclined to do another art of it after I do.

Did you play Aquaria?  If not, maybe you should! It’s on steam but you can also buy the game directly from the Developer: Bit Blot  by going here.

That’s that!  First Fan Art Friday Finally Finish!  Kyron’s on for next week. Hope you enjoyed it- What indie game did you like? If I haven’t played it, I might give it a shot and if I like it I might draw something from it on a FAF.

Like Loading...
This entry was posted in Fan Art Friday and tagged aquaria, art, illustration, naija. Bookmark the permalink.