Just when you were ready to take on the beast…

Hey so last week I was really pumped to work on LOF for the weekend.  Kyron and I decided we can tackle everything before the end of the year! I was excited about that idea and organized a definitive task list to finish the game.  I was quite hopeful about solid hours of production that weekend. Oh, what a fool I was.

Fast forward to  Saturday morning.  I sprang out of bed, jumped in the shower, put on my special pajamas and got ready to do the game dev boogie woogie. Little did I know that no such boogie woogie would take place. During the next few hours my machine (named Valkyrie) showed me an array of symptoms that would confuse and frustrate me to the point that I actually fantasized about adopting a horse as a pet to get away from it all. We thought it through and decided that it was an unrealistic choice for a pet. Anyway, So Valkyrie had big issues and instead of working on the Legend of Fae I was trouble shooting, scrounging to save my personal files in the strange world of safe mode, and realizing that I might have to open my tiny wallet for Valkyrie’s successor.

Luckily this isn’t a story about how a humble little game developer lost her way. It just took me a whole weekend of non productiveness to realize the power of reformatting.  Valkyrie has regressed to a child like state(factory settings) and is working much faster than before. While I didn’t get to do much, Kyron did manage to animate some sprites(when I wasn’t kidnapping borrowing his video card to trouble shoot).

With unexpected set backs like this it’s hard to really make a serious due date. But I won’t let this sort of thing get me down.  I’ve decided to take 3 weeks off from my contract work and dedicate 100% of my time to LOF . It’s ganna happen, or I’ll hang my head in shame.

So, what else is there? Oh yes, we entered IGF.(Looky here) 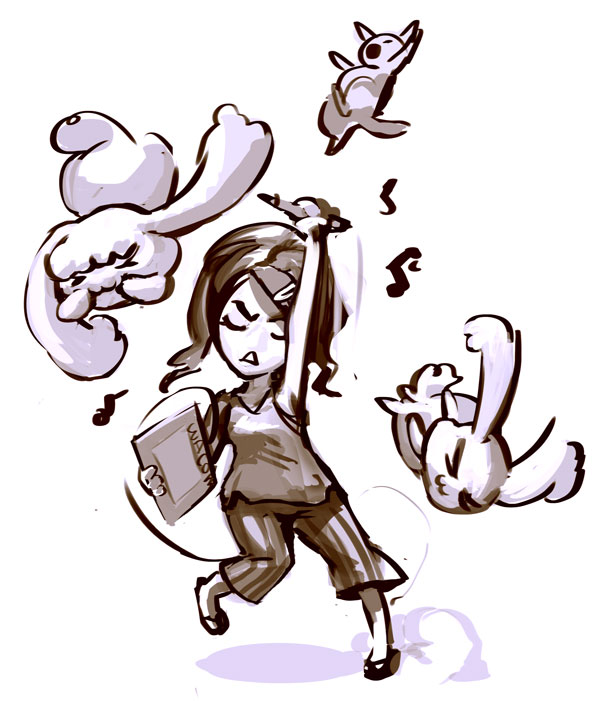 The gamedev boogiewoogie can be hazardous.