Mission accomplished! Disaster prevention was initiated last week and after a few days of waiting and one UPS failed delivery sticker, we stand here today one NAS stronger than before!

So that Nas had a pretty hefty price on it but it’s really thanks to Yoyo Games 5th competition that we were able to get it at all. I had the prize money in my paypal account waiting to spend it on a good idea. I kind of forgot about it up until Kyron’s computer started randomly shutting down  and scaring the shit out of me. So what was the actual damage?

Wooo Awesome Nas for 65 bucks! Not Bad. Thank you, Yoyo Games. Thank you, Nimbus.  Thank you, late nights melting away in front of a computer screen for 2 months.

Anyway, here are some shots of the babyman. 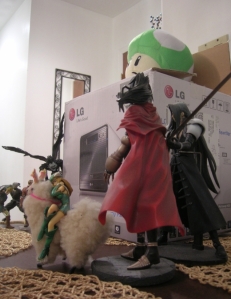 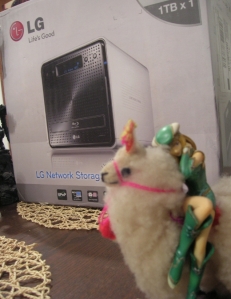 Freya is overjoyed by the TB of extra space! Or maybe she just really loves this llama.

Everything is backed up safely now. We can develop in peace.